“The Architect of English Expansion” by Daniel Carey and Claire Jowit 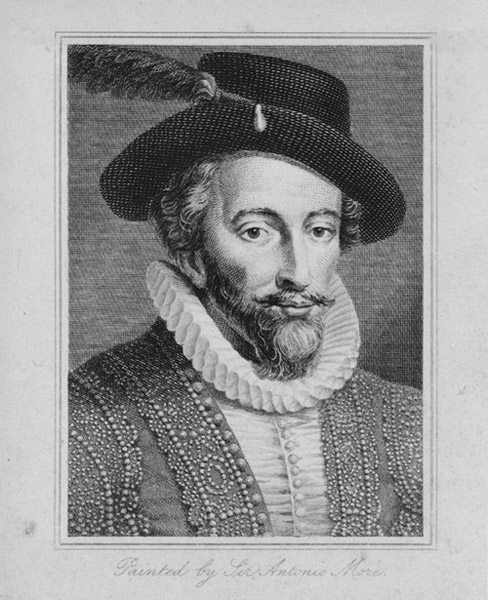 The Architect of English Expansion

Richard Hakluyt was a major influence on what was to become the British Empire.

Among the major commemorations taking place this year is the 400th anniversary of the death of Richard Hakluyt (1552–1616), England’s greatest promoter of overseas expansion. Hakluyt has always been an elusive and shadowy figure: there is no known surviving portrait of him. Likewise, there are no written accounts of his physical appearance. Like his contemporary, the poet John Donne, Hakluyt was successful in his profession, securing important clerical positions. On his death he was a priest at Westminster Cathedral, a position he took up in 1602 and, from 1590, rector of Wetheringsett and Brockford. He was, as Peter Mancall neatly sums up in his biography, Hakluyt’s Promise: An Elizabethan’s Obsession for an English America (2007), ‘famous enough to be buried in Poet’s Corner in Westminster Abbey, but not famous enough to merit a plaque telling of his bones being buried there’.

Hakluyt’s monument remains his work, capped by his editing of The Principal Navigations, Voyages, Traffiques and Discoveries of the English Nation, which first appeared in one large volume in 1589 and then in an expanded, updated edition in three volumes between 1598 and 1600. These publications created a rationale and plan for English commercial activity (hence the focus on ‘Traffiques’) in places such as Muscovy, Persia and the Levant, along with maritime exploration in search of a North-east or North-west Passage to China and colonial expansion in the New World, emulating and counteracting the achievements of Catholic rivals, notably Spain. The works of Hakluyt’s fellow quadricentennials, Shakespeare, Cervantes and even Ben Jonson (if we count the appearance of his first folio of 1616) may have transformed the literary landscape forever, but Hakluyt changed the geopolitical landscape through his tireless advocacy of English exploits in a world of increasingly global competition.

The Principal Navigations was a popular and influential book in Hakluyt’s lifetime and beyond. There are over 220 surviving copies, which suggests an eager readership and an extensive circulation of Hakluyt’s work. Christ Church, for instance, has the heavily annotated copy of The Principal Navigations owned by Robert Burton, author of The Anatomy of Melancholy (1621), graphically illustrating some of the ways one of his earliest readers actively used his work. Hakluyt depicted in stained glass in the west window of the south transept of Bristol Cathedral. (photo to right)

The influence of The Principal Navigations on the work of other writers was considerable. The poet Michael Drayton cited it in his ode ‘To the Virginian Voyage’ (1606), encouraging new travellers to take up the invitation to venture abroad while inviting ‘Industrious Hakluyt’ to anthologise their exploits: ‘Whose reading shall enflame/Men to seek fame.’ From the same period, Shakespeare uses Hakluyt as a source in Macbeth (1606), when the witches talk of a sailor’s wife whose ‘husband’s to Aleppo gone, master o’ the Tiger’. Not all references were affirming positive: Jonson in his play Volpone (1605-06) satirically mentioned Hakluyt’s collection when the traveller Peregrine refers to putting the foolish knight Sir Pol’s rambling travel diary ‘i’th Book of Voyages’. Despite this cavil, the world that Hakluyt opened up transfixed his contemporaries, as Shakespeare demonstrates in Othello (1601-04), where Desdemona has a ‘greedy ear’ for Othello’s travel tales, through to The Tempest (1610-11), where the conflict between Prospero and Caliban offers an allegory that resonates with the colonisation of the New World.

Hakluyt’s impact extended beyond literary references, though, as the collection had significant utility as a practical resource. Certainly a copy of The Principal Navigations was frequently included among the books would-be explorers carried with them. The expert in navigation and the Algonquian language, Thomas Harriot – who accompanied the expedition to Roanoke in North Carolina between 1585 and 1586 financed by Walter Ralegh and led by Ralph Lane – recommended in January 1602 that Samuel Mace carry a copy of Hakluyt’s ‘Booke of Voyages’ on his forthcoming North American voyage, also financed by Ralegh.

Hakluyt devoted much of his work to editing, compiling and translating material for his volumes, prestigious and elite activities in his day, but less valued now, in a post-Romantic era which privileges originality. This accounts for his relative obscurity as a literary figure. In his lifetime, Hakluyt did produce one original piece that remained in manuscript. In 1584, he composed a treatise advocating English colonial expansion, ‘A particular discourse concerning the greate necessitie and manifold commodyties that are like to growe to this Realme of Englande by the westerne discoveries lately attempted’ (also known as the ‘Discourse of Western Planting’). He was sufficiently well connected to present a copy of it to Elizabeth I, probably accompanied by Sir Francis Walsingham, Secretary of State, and also, perhaps, by Ralegh, his patron. This document advocated an aggressive imperialist and expansionist policy in North America providing what has been termed a kind of ‘grammar of colonisation’: in other words, it provided a manual or blueprint that the queen might use to enhance England’s international territory notwithstanding Iberian domination in these regions, based on Papal bulls following Columbus’ ‘discovery’ of the New World in 1492. We do not know what Elizabeth thought of this manuscript, or of Hakluyt, but clearly he had access to the most powerful in the land.

Following Hakluyt’s death, Samuel Purchas, the inheritor of his manuscripts and mission, continued the project to anthologise English voyaging, trade and exploration in an even larger book, Hakluytus Posthumus, or Purchas his Pilgrimes (1625). Eighty-five further collections of travel writing were published in Britain in the period between 1695 and 1830. However, attention to Hakluyt’s collection itself waned and it was only at the start of the 19th century that a renewed focus on maritime and American history helped rekindle interest in his work, reflected by the appearance of an edition of ThePrincipal Navigations in 1809-12, the first edition to be published in more than 200 years. By the 1840s, there was an increase in what has been called ‘Free Trade optimism’ – the belief that the British could sell manufactured goods in all four corners of the globe – echoing the type of expansionist feelings that Hakluyt’s work had expressed in the 1590s. The Hakluyt Society was founded on December 15th 1846, by William Desborough Cooley, a scholar who believed that the recently established Royal Geographical Society (1830) was not sufficiently focused on either historical or non-English materials. It was only in 1850, however, in its seventh volume, that the Society published an edition of Hakluyt’s work, specifically his collection from 1582, Divers Voyages, about the discovery of the New World.

The scale and complexity of The Principal Navigations and the lack of an accessible complete edition means that it is rarely read in its entirety even by specialists. The most widely available editions, produced about a hundred years ago by Dent/Everyman and James MacLehose and Sons both lack annotation. In 2008, a plan to address this deficiency began when work commenced on producing a critical edition for Oxford University Press in 14 volumes.

The transformative effect of the project to produce a new edition of The Principal Navigations is already apparent in new approaches to Hakluyt in recently delivered conference papers and articles. Hakluyt was one of the architects of what was to become a global, oceanic, and mercantile British Empire. His editorial labours were crucial in the creation of the English nation’s central role in a global economy.

Daniel Carey and Claire Jowitt are co-general editors of the forthcoming critical edition of Richard Hakluyt, The Principal Navigations, Voyages, Traffiques and Discoveries of the English Nation (1598-1600) and co-organisers of Hakluyt@400.